An easy way to link up the team

Being able to contact all its people, all the time, is vital at The Retreat, the safe house for mental wellness based in Omata, outside of New Plymouth.

And now that it is opening a centre in the heart of the city, communications are even more important.

That’s where broadband and service provider Primo has stepped in to lend a hand. It’s put in place a software-based phone exchange system that allows the staff, volunteers, residents and whānau associated with The Retreat to keep in contact with a minimum of fuss and a maximum of ease.

Jamie Allen says when he and wife Suzy started The Retreat, all the calls were handled with an old physical PBX he bought off Trade Me. But Waimanako/The Hope Centre in the Metro Complex is a much bigger piece of real estate and when it is fully operational in November it will have offices, a café, administration rooms and meeting spaces.

Jamie says he was talking with Callum Glennie, the Business Concierge at New Plymouth’s Primo, about how they could manage all the calls and direct them to the right person, day or night, at whatever location.

“I thought that might go in the too-hard basket, but nope! It was totally manageable,” Jamie says.

Callum says cloud-based PBX systems are the quickest, most convenient way to manage calls. They  can be re-routed with just a mouse click on a screen, messages can be checked from anywhere, and any number of calls can be managed with no need for any hardware.

Well, apart from the internet cabling which has to go to those phones that need it, Jamie says.

“And that got down to the nuts and bolts on the day that Callum and I were in the guts of the premises here, running the cabling and putting the wiring in and going through the crawl spaces doing the install. It was inspiring to see that people would care that much to put that much grunt in. It was amazing!”

“Now we can direct incoming calls to anyone at either location, and this includes our volunteer team of nearly a hundred people who are rostered on at different times. We can have it simultaneously ringing across two sites or ever more than that. And managing the voicemail services is brilliant.”

Jamie says Primo has always been there for The Retreat. From its earliest days the company helped get quality internet links to the Retreat’s Omata location, even building a tower for the wireless internet connection.

Such links are vital for the people and their families who are staying at The Retreat as they recover and regroup and renew themselves, he says. 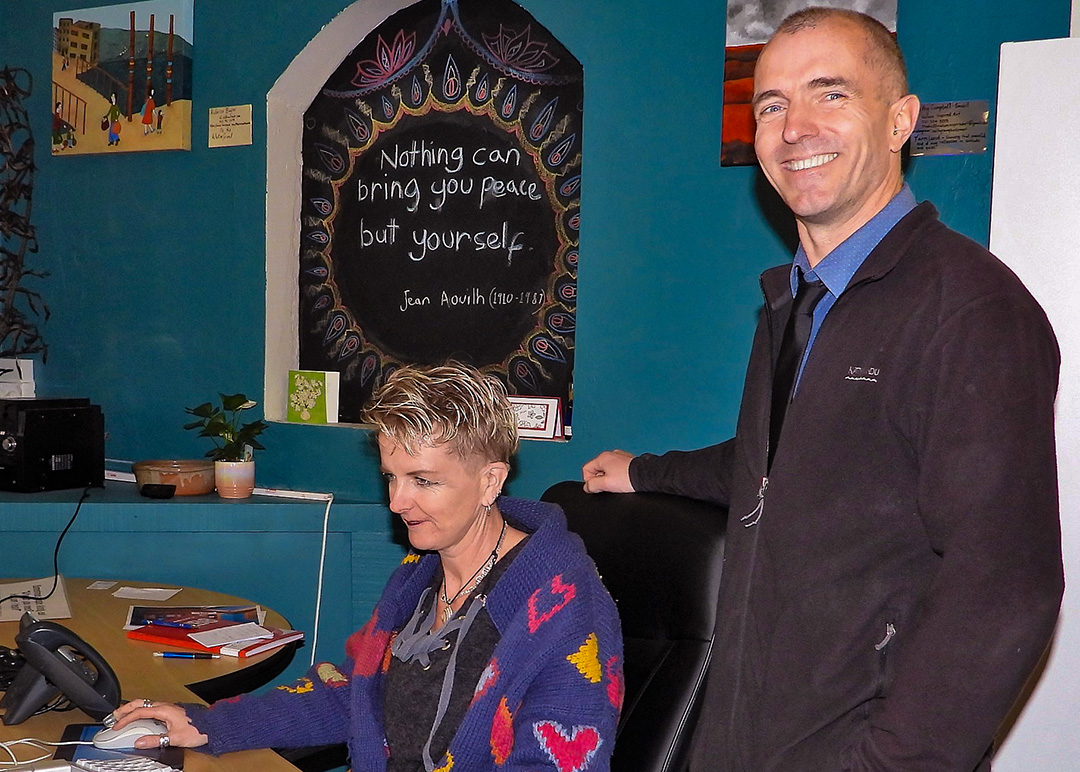 Jamie and Suzy Allen at the Metro Complex which is at the site of Waimanako/The Hope Centre in New Plymouth.

Having the PBX system fully sponsored by Primo is the icing on the cake.

“This one is based on the Hero VOIP platform … it’s such a powerful product and it is now even easier than ever to set up multiple phones, desktop or cordless, just about however the customer likes.

“Probably the toughest thing is getting the connections in where they’re needed for the wired-in phones. There are cordless phone options but if you’re sitting at a desk, it’s usually better to have a desk phone because they can’t go walkabout. That sometimes is what happens in workshops, but then again cordless ones are really handy in a place like a restaurant.”

The cost of running the system depends on the number of lines and phone numbers.

“Phone numbers are $15 a month, and if you do things like cellphone calls and overseas calls there’s charges for those, but the cloud PBX itself is free.”

As well as being flexible, it is possible to back it all up if the Internet decides to die by forwarding calls to a cellphone during an outage.

“Primo can offer plenty of suggestions to help people to tweak their VOIP system to make it better.

For more information about The Retreat and its services go to:

To contact Callum Glennie at Primo, email him on:

CEO, Stephen Hopkinson, tells us why the team at Taranaki Veterinary Centres like Primo

"Primo helped us to connect our five Vet centres (in Stratford, Hawera, Manaia, Patea, Waverley) to their ultrafast and wireless broadband services. So now we can run our businesses wherever we are in the region. They also connected our Hawera office to their back-up redundancy service, so when ultrafast fibre was cut, our wireless back up automatically kicked in. We were able to carry on working as normal which was fantastic! Their advice on how to set up our internet connection was bang on and tailored for our business' needs. Having a local service provider also means if things go wrong, they'll come down and help and their friendly technical team are just a phone call away. We recommend them to any local business - especially those with multiple sites like ours."

IT Consultant Rob McEwan tells us why the team at Baker Tilly Staples Rodway like Primo.

Rob McEwan runs the extremely busy IT Consulting Division for Baker Tilly Staples Rodway in Taranaki. His team look after many businesses throughout Taranaki, to ensure they have the right IT products and services to help their business run as effectively as possible. And when it comes to choosing an internet service provider, Rob recommends Primo to his clients every time.

“Having fast, reliable broadband is essential for every business today, which is why we recommend Primo to our customers. We use Primo ourselves and not only is their service great, but because they have a redundancy, or back up feature, we also don't have to worry about our internet going down. We believe every business in Taranaki should invest in an internet redundancy. So if you can't afford downtime, then we recommend that you talk to Primo."

Head Chef and Business Owner of Okurukuru Restaurant, Sohnke Danger, tells us why he likes Primo.

Two years ago experienced Taranaki Chef Sohnke Danger had Primo's wireless broadband installed for at his home in Okato. He'd tried other internet service providers before, however they didn't specialise in rural braodband and the connection was slow and often didn't work in bad weather. Primo helped him to banish these problems and Danger quickly became a fan.

When he acquired Okurukuru Restaurant, Danger didn't hestitate to call in the Primo team to connect the business to faster broadband.

"Having fast, reliable broadband is crucial to our business. We host a lot of conferences and our customers expect us to provide them with the latest technology and equipment as well as superior service"

Superior service is vital to the success of Okurukuru Restaurant and Danger believes that Primo provides the best customer service in Taranaki.

In our industry, service is very important to us and we like that it's important to PrimoWireless too. With Primo we get fantastic service, from local people who care. Getting broadband to this building wasn't easy, however Matt and his team found a way. And while there's never been any problems, we know we can call Matt in the team up if anything went wrong and they'd be here to fix it in an instant.

Okurukuru Restaurant is open for lunch and dinner on weekdays. To make a booking or find out more about Okurukuru, please visit their website.

Running a farm in a remote part of Taranaki has its challenges. And getting access to fast and affordable internet services is one of them. Many farmers have simply given up the fight and have either accepted the fact that they will pull their hair out when trying to use their slow dial up services or have done away with the internet all together, which leaves them feeling even more isolated.

However as Bryan discovered, Taranaki farmers can now access faster and more reliable wireless internet services, thanks to Primo. Primo have built their own wireless network, which nearly goes right around the mountain and enables farmers in remote parts of Taranaki to access better internet services.

“Our internet used to be far too slow and expensive so we got in touch with Primo to see if they could do something about it," says Bryan. "Primo erected a satellite on our farm, which now services 20 other Tarata farmers, so we're all much better off."

“Primo helped us to get faster broadband at a better price. These buggers won’t pull the wool over your eyes! Managing the business side of my farm is now more efficient, magic and really reliable regardless of the weather.”

Our normal office hours are:

9am till 5:30pm, Monday to Friday. (Closed on all Public Holidays)